Model info: The name says it all – it’s a Stratocaster…plus. The “plus” was the introduction of a few new design advances: 3 Fender Lace Sensor pickups (originally, 3 Gold Lace Sensors), which were designed to reduce if not eliminate 60 cycle hum; a roller nut; and, locking tuners. All in all, the model’s marketing role was that of an upscale American Standard. In light of the model’s life span of over a decade, expect spec variations.

Notes: Notice anything strange about the front of the headstock? Where are the string trees? The roller nut eliminates the need for them. Next time you see a “Strat Plus” on eBay with string trees, you’ll know it’s time to look elsewhere (it’s probably an American Standard with after-market Lace Sensors).

The Stratocaster Plus Series, by Jeff Reich*

The Strat Plus Series was introduced by Fender in 1987 and was the highest-end production model next to Fender’s Custom Shop guitars. (Production stopped in late 1998 or early 1999.) The Plus Series consisted of the Plus, the Plus Deluxe, and then later, in 1990, the Ultra. The Plus Series was a very good attempt to reclaim Fender USA’s floundering reputation, as quality had drasically gone down hill under CBS ownership. All the Plus Series had similar features. This article discusses the Standard Plus.

After CBS sold Fender in 1985, there was no production of Fender guitars in the U.S. from February, 1985 to October, 1985 (almost 8 months). When the Corona plant was started up, only the Vintage Reissue Stratocaster models were produced between late 1985 through 1986. Finally, as we talk about the Plus Series, the Fender-Lace Sensor pickups, invented by Don Lace, were introduced in 1987. A Lace Sensor “Dually” was also used in the Ultra and some Tele Plus’ using two Lace Sensors placed side-by-side, looking like a humbucker though they were actually two independent pickups.

One thing is for sure—even though these guitars vary, all Plus guitars had: locking tuners; a roller nut (which means the headstock will not have string trees); and Lace Sensor pickups. I have seen American Standard Strats with Lace Sensors that people try to pawn off as a Plus so beware!

Let’s take a closeup look at the features of the Standard Plus. The above Aqua Blue is a stock 1988 Plus in mint condition which had the pickguard changed to the periold style. The standard Plus usually came with 3 Gold Lace Sensor pickups. These pickups were designed to give a ’50s single coil sound with a lot of chime and even bell-like tones. Crisp, and quiet, they really do perform like a 1950s pickup, but with no hum. The Lace Sensors represented a revolutionary new design for single coil pickups—having a unique radiant field barrier system that surrounds both the coil and magnets, eliminating the annoying 60-cycle hum. The patented Lace Micro Matrix Combs replace traditional bobbins, yielding a wider tonal range and better string balance than traditional pickups.

Here is a little Fender inconsistency for you. Fender lists the colors that were available for the Standard Plus models as: Arctic White, Black, Black Pearl Dust, Blue Pearl Dust, Brown Sunburst, Caribbean Mist, Grafitti Yellow, Lipstick Red, Midnight Blue, and Midnight Wine from 1987 till 1997. And then in 1997, Candy Apple Red, Inca Silver, Sonic Blue, and Vintage White finishes were introduced; Arctic White, Black Pearl Dust, Blue Pearl Dust, Caribbean Mist, Lipstick Red, Midnight Blue, and Midnight Wine finishes were supposedly discontinued. What about the Aqua Blue Plus above? And then I have owned Sea Foam Green, Surf Green and several other colors. You can see a nice Sonic Blue below on this page. Many of the Plus Series, but not all, came with a Hipshot Tremsetter (pictured above), which compensated for string tension. Once set up correctly, and after getting the guitar in tune, they stay in tune. If a string breaks while playing, the Tremsetter will compensate and the guitar will stay in tune. Like many of the later USA Strats, these necks have the micro-tilt adjustment, which is an Allen screw under the Fender neck plate that pressed against a truss-rod grommet on the backside of the neck. This gives you the versatility of tilting the neck instead of the old method of resorting to shims. All have the skunk-stripe down the back, with a nice C neck profile, as well as the Bi-flex truss rod, which was a good improvment over the older straight truss rods. Another feature found on the Plus Series is locking tuners. Fender used both Shaller (left) and Sperzel (right) locking tuners. These are really slick as you just loosen the nut, pull the string through till it is tight, tighten the nut, cut off the excess, and tune. Also, you will notice that around 1993 the serial numbers moved from the front to the back of the headstock. 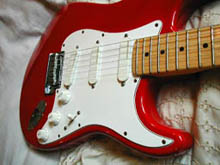 Many of the earlier Plus’ came with plain pickguards, like on these 2 mint Plus’: 1990 Midnight Wine Plus with rosewood, (left) and a 1993 Lipstick Red Plus with maple neck (right). The color of the Midnight Wine Plus’ varied as some have more of a purple color.

The serial numbers on the 87-8 models have caused some confusion due to the CBS buyout and the start up of the new plant in Corona, California. In general, Fender has had a lot of confusion over serial numbers, especially the older models. Many of the 1988 and later models will have a serial number that says one thing and the date in the neck pocket in the body or on the butt end of neck that says something different. Some have said this was due to the use of parts left over from the CBS buyout, or even serial number decals left over from CBS. Some of the very first Plus’ will have an E4XXXXX serial number, (as shown below) indicating they are from 1984. Truth is, it is a 1987, as production for the Plus Series started in 1987. Don’t let anyone try to convince you that there is a 1984 Strat Plus, they simply do not exsist. 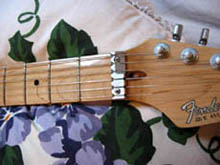 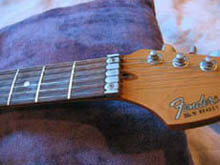 The photo (upper left) of the nut with the “E4” serial number is off the Strat Plus DX. The very first “roller nuts” were a Wilkinson type. As you can see with this one, the top 3 strings float while the other have to feed through an upper pin. This first version of nut was only used a short time and is rare to find. The other photo (above right) shows the Wilkinson nuts that had all the strings feed through a upper “roller” pin that the string rested on, while it went down under a 2nd pin. These were a problem if you wanted to use heavier strings as feeding them through the two pins was a real hassle. (And sometime they just will not fit through the space.) The Wilkinson nuts were inferior to later LSR Roller nuts (above) that started to appear mid-1993. These made string changes much easier, as each string rode on top of a set of roller bearings—a really great improvement over the Wilkinson nuts. The idea with the roller nut was to improve tuning while using the tremolo.

The Plus necks were made from maple with either a rosewood or maple cap and usually had 22 medium-jumbo frets. The Gold Lace Pickups were also used on several signature model guitars, as seen on the Jeff Beck model above. The JB Strat uses a Dually Gold Lace in the bridge with a push button “coil splitter” to have it operate in either single or dually mode. (Really, since the Dually is just 2 Lace PUs side by side, the switch just turns off one PU). And there was the Eric Clapton Signature Strat with 3 Gold Lace pickups and a 25db mid-range boost. There was also the Buddy Guy Signature Strat that likewise used Gold Laces. This Natural Plus is a 1989 made from a fairly heavy peice of ash. Most of the solid colored models were made from alder. It is said, but I have not found out if it is true, that some of the transparent colors had ash sandwich-laminated on alder.

All the Standard Plus Models had the American Standard two-point floating bridge. Above is a 1997 Sonic Blue Strat Plus that is a closet classic—the guitar has rarely been played. 1997 was the first year for this beautiful color, which is very similar to the Dalphne Blue of vintage Stratocasters. The three Gold Lace Sensors really put out that ’50s vintage sound. On the Strat above you can see the 1996 anniversary sticker on the back of the headstock and can tell the pickups have been change over to the Hot Gold Lace. These really screams with the vintage sound of a 1950-60s Strat but with more power and a hotter bridge pickup. This guitar has a look to it like it should be sitting in the back seat of a 1955 Chevy Belair hardtop.

*The above article and images are © Jeff Reich and are presented here with the author’s express permission. For more Strat Plus and similar model information, please visit www.xhefriguitars.com.